baked with lots of love ❤

This christmas break I spent at my family’s in Japan. Already months before I arrived, they started to worry what I would be able to eat – A: because that’s what they always do, make a huge effort to let me eat all the most delicious things they can find (^-^ lucky me!) – and B: because this was my first time as a vegan coming home to Japan.

Tofu topped with ground sesame and shoyu on rice 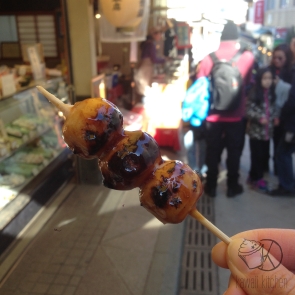 Although japanese cuisine includes a lot of vegetables, nearly everything contains dashi, fish based broth. Konbu dashi, based on seaweeds, is also available, but most of the time, katsuo or other fish-based dashi is used. So basically, as my step-mother jokingly suggested, if you want to survive as a vegan in Japan, the easiest way would be to quit veganism – but that was not an option for me. And after spending two weeks here by now, I figured out that it is also possible not to starve as a vegan in the Tokyo/Yokohama area, even though you need to read ingredient lists very carefully. As there are not so many guides about japanese everyday vegan nutrition in English available yet (especially for Yokohama), I thought I’d sum up my experience and tips in this blog post.

Japanese foods that should be “animal-free” in general are

There are already a couple of very nice guides for vegan/vegetarian restaurants in Japan, for example here and on Happy Cow, so I do not want to repeat everything, there is just one addition, which is Natural Harmony Coa in Yokohama.

Located in the basement of the North Port Shopping Center in Center Kita, Tsuzuki-ku, this small restaurant serves organic washoku (japanese dish) style food of high quality. Their menu always varies a little bit, depending on the ingredients available, but they always offer several vegan menus and also some fish or meat menus. I went there twice with my family, and as they’re omnivores it was the perfect place to go to, where vegans as well as non-vegans can get super delicious food.

Noodle restaurants (soba or udon): ordering with daikon oroshi and shoyu (grated radish and soy sauce) or shoyu and wasabi instead of the normal sauces is a very tasty option as the standard sauces usually contain fish broth. For ramen, there are a few restaurants serving vegan ramen, for example T’s Tantan and Kyushu Jangara in Harajuku/Omotesando.

Vegan sushi: kampyo maki on the left, and inari sushi on the right

Vegan sushi: kappa maki and nigiri with nasu no tsukemono 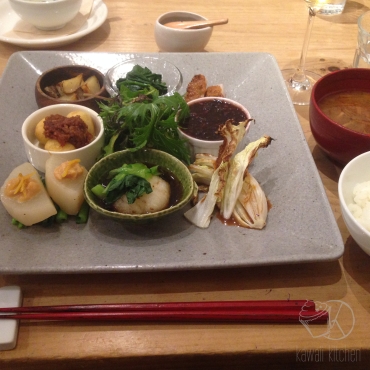 Sushi restaurants: aside from kappa maki (cucumber rolls) and inari sushi (fried tofu bags filled with rice), several sushi restaurants also offer kampyo (a kind of gourd, called “calabash”), ume shiso (sour plum with shiso, a herb) maki, oshinko maki (oshinko refers to all fermented vegetables but for sushi, usually takuan, fermented radish is served), and once I even found nigiri with nasu no tsukemono (fermented eggplant). So at sushi restaurants vegans can find quite a selection of vegetable based traditional sushi and as these are not considered the sushi specialties, they’re most often rather cheap.

Yakiniku (Korean BBQ) restaurants are certainly not the best choice to go to for a vegan, but if you happen to be accompanied by omnivores like me, it is also possible to eat vegan there. Usually they offer “namuru” (korean  pickled roots and vegetables) and different vegetables you can put on the grill. As the tare (sauce) with which the vegetables were seasoned contained some animal-derived products, we simply ordered them separately and they were so kind to even offer me some vegan dipping sauce options (shoyu and wasabi as well as shiodare, sesame oil with salt). I also ate bibimbap without meat and egg, basically rice topped with namuru, nori (sea weeds) and gochujyang (korean spicy seasoning paste) which was also quite delicious as a vegan version.

Eating on the go & grocery shopping

Eating on the go a.k.a. buying something from the convenience store is rather tricky in Japan. Sandwiches and baked goods more or less always contain dairy or meat/fish products, and japanese snacks like onigiri are filled with fish most oftenly. Sometimes you can get onigiri with konbu filling, but be careful and check the ingredient list (scroll down for a short kanji guide) as the filling might contain katsuo dashi or other fish-derived ingredients. Another option can be inari sushi, if they’re available. For drinks it is a little bit easier as you can always find different teas and also plain coffee, and I even spotted matcha soy latte from the muji brand in some family marts, but for sure those cannot be found in every single convini.

Grocery shopping can also be quite complicated in Japan when it comes to vegan specialty products. There are several soy products which contain animal-derived ingredients unexpectedly (like gelatin in soy yogurt), so be careful to check ingredient lists here as well! Two products I’ve checked and have been buying frequently are this soy milk and soy yogurt:

For soy milk, most supermarkets offer quite a big selection, although I have not tried a lot of those products yet.

All in all, grocery shopping for the basic foods in the Tokyo/Yokohama area is possible, just make sure to always check the ingredient lists.

For foreigners who cannot read kanji very well, I made a short, very basic list of what to avoid:

Hope this helps vegans when travelling in Japan. All in all it is possible to eat delicious food, also traditional dishes, if taking a little care and if in doubt – asking. (You might get some funny looks, as vegetarian or vegan lifestyle is not as common as in western countries yet, but they’ll probably forgive anyone that looks foreign :)).

I’m Jojo – baker and founder of kawaii kitchen cakes, baking with lots of love since childhood. I started kawaii kitchen as a baking blog in 2011 – and turned my dream of a sustainable bakery & plant-based patisserie into reality in 2019.

soon, kawaii kitchen cakes will finally re-open! with a new name, new location, but same established principles: to provide you with ethical, sustainable sweet treats #bakedwithlotsoflove.  thank you so much for your patience, we can’t wait to start baking for you again! 😊  stay tuned for more details #comingsoon! 🧁🌸  #veganberlin #berlinvegan #kawaiikitchencakes #sakuraberlin #sustainablebakery #plantbasedpatisserie #openingsoon #economyforthecommongood #happiness #delicious #omnomnom #vegancake
re-opening in spring 2021! kawaii kitchen cakes is temporarily closed, and as of Jan. 5th not taking any additional orders.   We are unbelievably grateful for all your support in 2020, this year which was not made easy for any of us. And despite all the outer circumstances, and with your support, we have grown into a situation to expand. This means we will take some time to work on our new location, and re-open kawaii kitchen cakes - sustainable bakery & plant-based patisserie in spring of 2021!   Starting Jan. 5th, kawaii kitchen cakes is temporarily closed, and I apologize that we cannot take any additional orders during this time.   We wish all of you a happy new year 2021 and can’t wait to start baking for you again! Stay tuned for updates to come ... 🌸🤍🍰
Thank you, thank you to all of you - thank you to our favourite plant café and collaborator @thegreensberlin & our beautiful home of @alte_muenze.  2020 was not an easy year for any of us, and I sincerely hope that all of you are safe, and able to look forward to a hopefully brighter and relieving year 2021!  Despite the pandemic, kawaii kitchen cakes was able to hire our first employee and wonderful colleague @osbick and continue baking for you throughout all lockdowns here in Berlin. I can’t express my gratitude enough, to @osbick, for working with me throughout the ups and downs and uncertainties of the pandemic, and to YOU - for all your support without which it would not have been possible to survive as a tiny business until now. There is also no words suitable to express how thankful I am to be in such a privileged position, to be healthy and able to continue baking with lots of love at kawaii kitchen cakes until now. Thank you all so much, ありがとう、herzlichen Dank! 🙏  We hope that our sweet treats #bakedwithlotsoflove managed to bring some smiles and enjoyment and brighten up this past year 2020, and we look forward to create new sweet sensations for you in 2021 - people-, animal- and environmental-friendly, as always 🧁☺️  In January, we will be temporarily closed and not taking any additional orders. We’re working on a few pretty cool things and can’t wait to re-open soon!   Until then, stay safe, everyone, take care of yourself and each other, and don’t forget - things are going to get better <3
Whether you’re celebrating Christmas or not, kawaii kitchen cakes wishes you all the best and a few relaxed and joyful days ahead for the end of this year 🤍